On October 4, 2008 the first general assembly of the FBBSI took place in Budaörs (HU). Mainly discussed have been organisational items, future projects and events. Additionally a task list was approved. Short report: 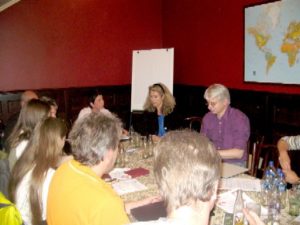 FBBSI-secretary Birgit H. Hilsbos welcomed 11 delegates who were entitled to vote with 13 votes as well as 6 guests without voting power.

The annual report and accounting 2007 was called out and approved.

1. FBBSI-Cup 2009: From 2009 on every year a FBBSI-CUP will take place. This representative, international show will at first take place in Switzerland according to the 20th anniversary of GWS Schweiz. In 2010 this special show will be arranged by BVWS.

Character profile: This is the most important collective project and shall serve the breed in future. The «Committee Character Profile» was approved, which consists of 2 delegates of each member club. Main task: Untill mid of 2009 the committee has to present a concrete proposal on the character profile. After adaptation of the FBBSI, the proposal will be submitted to the appropriate National Association SKG.

Health-Meeting: Breeders, responsable persons and all interested people in future shall have the possibility to continuousely inform about timeliness of the health of the breed and to discuss this with experts. Dates and Place still have to be sheduled.

HD-Project: The delegates have been informed about the project of «Tierärztliche Hochschule Hannover» (Prof. Ottmar Distl). This method can help to battle against HD and has to be analysed for using for BBS. Therefore everybody whose dog has an HD-evaluation is asked to send blood samples to Hannover.

Preparing dogs for shows: The delegates have recognised, that BBS-owners practice cutting the whiskers. The delgates voted against this. Everybody who will go on with this will be discarded from the breeders list. The FBBSI is entitled to do so, even if the FBBSI receives the message from other exhibitors.

Stud dogs: As soon as possible, a cost-free list for members and partners will be build and published on the FBBSI-homepage.

Helpline for BBS: SFJK-secretary Rita S. Szabo reported about the bad circumstances, of BBS in Hungary. She founded a special helpline, which will be published on the SFJK-homepage.

General assembly 2009 will take place on 22nd or 23rd May in D-Kirchroth according to the «Bayernsiegerschau» of BVWS.

The report will be send to the members.